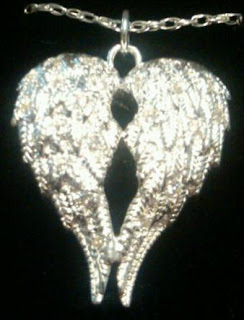 Vern wanted to be cremated, but it took me awhile to come to terms with that. I had a varied religious upbringing, attending Quaker, Southern Baptist and Assembly of God churches in my younger years, and somewhere along the line picked up that cremation was wrong because it desecrates the body. I read a lot and talked to some people and eventually changed my mind about that. And I can tell you that being there when Vern took his last breath assured me that his soul left his body and that shell was only useful here on earth. How could I want to believe that he would have to return to a body that had caused him such pain? And having his ashes here with me has brought me such deep comfort. I don't know whether I'll stay in Las Vegas after I retire, so this way he will be with me no matter where I am. Someone mentioned they have jewelry that you can add a tiny bit of your loved one's ashes to, so I started looking at what was available. I was amazed at the choices, but the moment I saw the angel wings shaped into a heart I knew that was the one for me. As I shared on CaringBridge, Vern saw an angel in the room at hospice and I had prayed that angels would surround him to lift him to Heaven.

This is my first weekend without my big work project hanging over me. I've caught up on some sleep but haven't done much else. I just feel so lost without Vern here. I'm working my way through the piles of mail and have only found one unpaid bill so far, but it's hard to get focused on anything. I still haven't started through the box from the mortuary or any of the sympathy cards and thank you's. I know I need to.

Guess I should start making some to-do lists and try to check things off as I can. One thing at the top of the list was the yard ... what a mess. It's needed attention for some time but I just couldn't spend time out there while taking care of Vern and working. I think Vern had something to do with the knock on the door this morning. It was a landscaper who is out there right now trimming the mesquite trees and overgrown bushes, cleaning out the weeds, blowing out the neighbor's pine needles. All it took was some cash and now that's one thing I don't have to worry about until Spring. Although I told them not to touch the roses. Those are Vern's and I need to give them some special attention.

I'm going to head back to work tomorrow since I left such a mess there on Thursday after the event. I do want to take some time off - I think I must take some time off - but want to get things in order first so I don't have any of that hanging over my head. I was also supposed to move into a different office last month, so I need to get that task completed before I take off. My son isn't happy that I'm going back tomorrow since I had originally said I would just return to get through the event. He's concerned that I keep delaying dealing with all of this and it's not good. I'm not sure. I have no choice but to deal with it 24 hours a day/7 days a week. I am lonely. I cry often. I miss him. Vern was my best friend and we would talk to each other each day while I was at work. Not a day goes by that I don't start to pick up the phone or think about telling him something and then have to stop myself. This is hard.

I know everyone means well when they say I must do something nice for me. But I'm not there yet. It feels like that would be saying I'm happy to not have to be caring for Vern any longer so I can spoil myself. I would give anything to have him back here with me - along with all of the work that involved - but that isn't possible. And, truthfully, I can't wish for that. He was so very tired of all of the treatments and the pain and he deserves to be free of that. I just need to try to find a happy medium in all of this. I'm confident that I will ... it's just going to take some time.
Posted by A Myeloma Widow's Journey at 9:56 AM

That is a gorgeous necklace Dianne. I can see why it grabbed you!
Love your blog and I have subscribed to it...Thanks for posting

Do what feels right in your own time. There's no grief timetable. You'll find your own way. I kept a half eaten carton of ice cream in my freezer for 8 months after Richard died because he bought it. I cried when I finished the toothpaste that had been in his bathroom, but I had no trouble giving his clothes to Goodwill. Our local hospice has a support group for "young" (under 65) widows and widowers and it does help to talk to others who really understand. Please email if I can help.

I do love this stunning necklace and what a beautiful thing to keep by you always.I hope you get it and it seems rather fitting as I know Vern is with the Angels. My Father is also a Guardian Angel and I bet they are watching the football together. Wonderful men always met up! Love and all best wishes.