45 years ago today ... it was hot and sticky in southeastern Michigan. I recall picking up our wedding cake from the neighbor who baked it (with my hair in those pink spongy curlers) and placing the cake in the trunk of my car to deliver to the church. No big reception for us (no $$) so we were just using the church hall to have some cake and open gifts after the ceremony. The rain didn't arrive until during the ceremony, and that just made the sanctuary even more humid. Perspiration dripped from my guy's face ... humidity or nerves?  Probably both. It was a whirlwind romance that neither of us could have ever predicted. "Where it began, I can't begin to know when ... but then I know it's growing strong. Was in the spring, then spring became the summer. Who'd have believed you'd come along."

It was the summer of '69.  I was just 18, Vern was 28. He had been one of my high school teachers, but there was no hint of what was to come until after I graduated. Our first date was June 8th, we were engaged on July 8th and married on August 23rd. That speedy time frame didn't seem out of the ordinary to us at all. We just knew that we were meant to be. And we were.

I was blessed to spend 41 years with Vern. Truly blessed that he chose me. And blessed that I was able to care for him and hold him as he took his last breath. I spent our 42nd anniversary alone here in our house; I was at Brave Girl Camp in Idaho on our 43rd; and last year I drove his Mustang up to Mt. Charleston and had a special hummingbird visit. 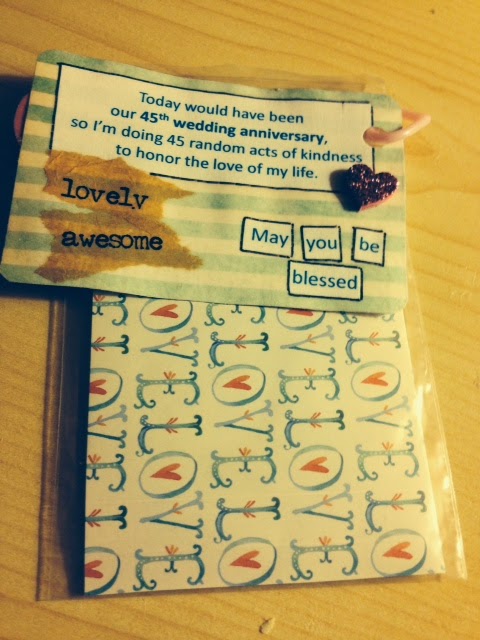 So I prepared the cards, added some cash or gift cards to the envelopes,bought flowers and balloons and helium. And off Jer and I went. First stop was to pick up 6 dozen Krispy Kremes, and then off to St. Rose.

What an amazing morning. There have been some major changes at the hospital, lots of construction (finally a parking garage is being built!). We found our way into the ER waiting room and made some staff extremely happy with the hot Krispy Kremes. I explained why we were doing this and they were surprised and so appreciative. We then headed up to the 3rd floor - that's where we spent a lot of time as it was the chemo and surgical floor. More donuts for the staff. And I gave the gift cards to the charge nurse to give out to those who really need them. Jer and I then headed down the hall and gave out flower bouquets to the patients. Oh my - this was extra, extra special and something I will do regularly. We met a couple who had just celebrated their 55th wedding anniversary and a woman who had just celebrated her 45th anniversary in the hospital - and a lovely Iranian woman who was overwhelmed with our gift and kept shouting to God to bless us. Patients and staff were so surprised at our generosity - and so very thankful. Then we were off to the parking lot to fill up balloons with helium and attach a card with some cash in it to 20 cars. We chose to place them on the cars in the ER parking spaces and were paid a visit by a Security guard. When I explained what we were doing he was rather impressed and gave us the ok to continue.

I don't like to honor the day Vern died ... that is a day for private reflection for me. But this ... oh yes, this is something I will do again and again. On our wedding anniversary, on his birthday ... and I'm thinking once a month 'just because'.

I expect to pass through this world but once; any good thing therefore that I can do, or any kindness that I can show to any fellow creature, let me do it now; let me not defer or neglect it, for I shall not pass this way again.
Stephen Grellet