I just returned home after spending the past 5 days in Tampa at Camp Widow. Soaring Spirits International is celebrating its 10th anniversary this year, and this was our 20th Camp. If this Tampa Camp is any indication, 2018 is going to be a spectacular year for the Soaring Spirits family.

I attended my first Camp Widow in San Diego in August 2011, just 11 months after Vern died. I had no idea then that I would end up attending every subsequent Camp (this was #18 for me!) and that I'd be asked to join the Leadership Team. So many wonderful people I've met through the years. So many lovely memories.

It's difficult to think there can be blessings that come our way after losing our loves, but this group of women is surely a blessing that would not have happened if Vern were still here with me. I am grateful for each one of them. 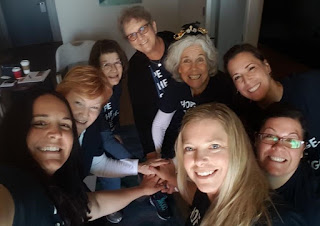 I met Rebekah in Widowed Village in November 2015. She arrived less than a month after the tragic loss of her husband while on vacation in Bora Bora. We shared a lot of time in the Village chat room and she came to the Tampa 2016 Camp just 4 months later. Seeing her transformation at that Camp was my favorite moment that year and she gave me another favorite when she surprised me at this Camp. I heard her calling my name in the crowded ballroom and she gave me the best and longest hug ever. It filled my heart. But that wasn't all she did.

After we did our beautiful message release, the music and dancing started. I found myself out on the dance floor with some friends and then there was Jason (Rebekah's boyfriend) asking me to dance. I chuckled and said something like Rebekah must have promised you something wonderful if you would do this. And this sweet young man said 'No, I just want to dance with a beautiful woman.'  Well, my goodness, how could I possibly respond with a 'not nice to Dianne' comment? So I just said 'thank you'. We don't play slow songs at Camp - and I can't even remember what song was playing - but Jason took me in his arms and danced with me. He even twirled me a time or two.  But the best thing? He held my hand. Not just the way you do when you dance with someone ... but he intertwined his fingers with mine. Just like Vern did. I thought my heart might burst and I knew that sweet Rebekah surely must have read my blog or Facebook post about missing having my hand held. What a lovely gift of kindness those few minutes were.

I'm sure my little moment on that dance floor might not seem like much to many of you, but it's the little things that matter, you know. Rebekah noticed. She saw me. She heard me. And she asked her guy to do something very kind for this ol' gal. I am grateful.

What can you do to make someone's day? Are you listening? Are you noticing?  Do you really see them?

I'm beginning to think that the angst I felt during January and February was as much due to getting older as it was to being widowed and alone. I've never been one to think much about my age. I was always 'young' when Vern was around because he was 10 years older. But 66 was a hard number for me, for some reason. Perhaps because it's closer to 70 than 60?  But then, what's wrong with 70? Nothing! I took Marianne Williamson's Aging Miraculously course and truly believe that we elders have much to offer this world and the age-shaming needs to stop. But .... still ....

Anyone who has lost their person becomes keenly aware of how very short life is. Our loves were snatched away before their time (no matter how old they were) and that is our new reality. I made a real effort to find my way through the grief and to add things in my life to fill those alone hours. The clock was ticking. I kept working for five years to keep busy and started volunteering for Soaring Spirits and exploring all that Brave Girls Club had to offer. Trips to new places and art retreats and Camp Widows filled up my calendar and I figured I was ok living like this for the next 30 years. I retired three years ago and became busier than ever. Certification training, holding Soul Restoration Retreats and SoulBook Gatherings. But in the midst of all of this I've found there comes a time when just filling your days is not enough.

I've had some time to do some deep thinking about all of those feelings that surfaced during the past couple of months and I do believe that it had nothing at all to do with the person who initially sparked those feelings. He was safe, unavailable, so it made it easier to think about it all. It wasn't real. It wasn't possible. But now I'm thinking those feelings actually surfaced because the years are flying by rather quickly and the harsh reality of being alone at the end of my life suddenly became a little too hard for me to accept. Not someone to take care of me in my old age, but someone who needed me, wanted me, cherished me ... would anyone ever choose me again, like Vern did so long ago? And, alas, I no longer believe that is an option. The risk to my heart and soul for putting myself out there is just not worth it. So, yes, I guess I've gone full circle in how I feel about dating or having a new person in my life. 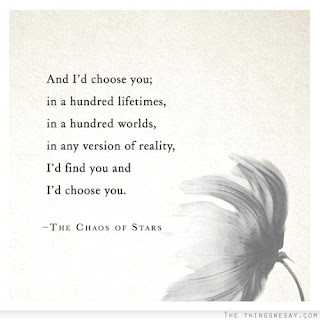 One of the burdens I carry is this oh-so-tender heart of mine. It helps me do some really wonderful things for others, and I am very grateful for that. Those things I will continue to do as long as I'm able. However, this tender heart is not very kind to Dianne. I get hurt often and I hide those hurts with a smile and carry on. But they sure do take a toll. For instance, someone said some hurtful things about me on FB yesterday and no one spoke up on my behalf. I'm not willing or able to enter an online battle of sharing the truth about that situation, so instead I shut down the internet and headed straight to bed the moment I got home from my SoulBook Gathering. And, yes, that brought on a sleepless night of all sorts of not-so-good thoughts like I had in January ... not loved, not good enough, ugh. If I had had alcohol in the house, I'd be nursing a pretty awful hangover today.

Instead, I'm really trying hard to fight my way back. I have never been a depressed person, but this hole just keeps following me around and I need to face it and be done with it  Once and for all. All I really want to do right now is to run away to where no one knows who I am. Yeah, exactly like how I felt right after Vern died. Only now, I could actually do it. But could I? The way I feel right now ... yes, I could ... it actually sounds rather heavenly to me.

But I know me. And I know I can't just walk away from my responsibilities, as much as I really, really want to. And I do know that I have people in my life who care. Those lovely women I spent yesterday with showed me that with their words and actions. And dear Heather gave me one of those "not letting go hugs" that I said would be so lovely in a FB post this week. She sees me.

So, what to do? Well I'm just too fragile today to think any more about this. So the first thing on today's agenda is a nap. And it's also my day to handle Widowed Village intake and run the Pen Pal Program. And I've got to finish up the Tampa Camp volunteer schedule and get all of those emails on their way, and start running off all of the reports and papers I need to take to Camp. That should pretty much fill this day, I think. I can always think about this hard stuff tomorrow. 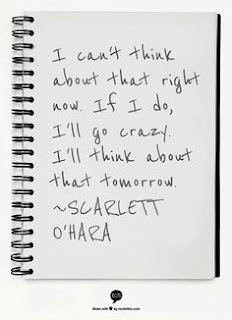 Posted by A Myeloma Widow's Journey at 11:40 AM No comments: