Well this has been quite the week. One thing after another just bringing me down ... layer upon layer ... questioning my worth, beating myself up, feeling unloved, not good enough, so alone. Ugh. And then to top it all off, yesterday I had a really nasty gall bladder attack. Really, really hard to have no one around who cares about you when you're not feeling well. OK. What the heck is going on? This is NOT who I am. Help!

So I was forced to do a little self-care. After the pain and nausea settled I climbed into bed with my Lularoes, socks and a sweatshirt, piled on a blanket and afghan cuz I was freezing and just did jigsaw puzzles on my phone. Total waste of time. But was it?  I don't think so.

Because while doing the mindless puzzles, my head was still buzzing and I gave myself a good talking to. I even posted a little something in Widowed Village that was way outside my comfort zone. And when I woke up this morning, the first thought I had was to get up and go for a walk. Thank you, God.  Now that is definitely not my normal waking thought. Wow!

And it felt so good. The sun was shining (posted a pic on Instagram) and breathing in the cool, fresh air was invigorating. What a change in my outlook.

During my trek I came across a large group of high schoolers waiting for the bus. Interesting to note that not one of them was smiling and they were not talking to one another at all, just looking at their phones, of course. So I slowed my walk as I approached. And I caught the eye of one who happened to look up. "Good morning!", I said.  And she smiled back at me. And then another one looked up. And I caught his eyes and said "Good morning". Wow!  This felt kinda good.  And as I turned the corner, more kids were heading to the bus stop so I greeted each of them with a "Good morning!"

The initial surprise on some of their faces (that a stranger would greet them with a smile) saddened me. Perhaps they'll have a better day because of my two little words. Perhaps they'll smile and say "Good morning" to a lonely fellow student today.  I think I may need to plan my walk for this same time again next week.

So when I got home I decided to do something else to take on one of my bigger issues.

The mirror is not my friend. (I have had that issue for as long as I can remember.)  A dear friend had suggested I put a note to myself on my mirror.  (Thank you, Linda.)  So that's what I did.  I'll let you know if it works. 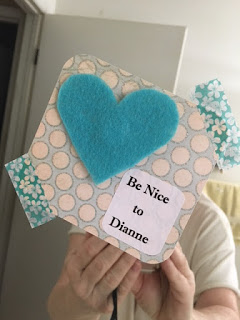 Posted by A Myeloma Widow's Journey at 9:11 AM

Dianne you need to do things for yourself on a regular basis. You spend so much time helping others and forgetting about yourself. That’s a great story about the kids because you never know what that might have meant to them if they were having a bad day. As far as the gall bladder...get it taken care of before it becomes an emergency. I suffered for a long time and getting it out was the best thing! Thank you for helping so many of us. Now help yourself.